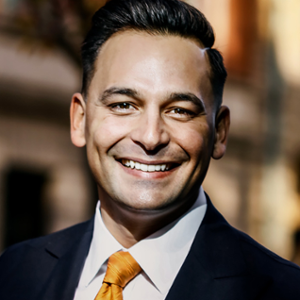 Andreas Hatzigeorgiou is CEO at the Stockholm Chamber of Commerce. He has been selected as Sweden’s ‘up and comer of the year’ and voted among the country’s ten best macroeconomic commentators. The leading business magazine in Sweden, Veckans Affärer, named him a Super Talent as part of the review of the country’s top talents.

Dr. Hatzigeorgiou is a Fellow at the Ratio Institute, member of the Carnegie New Leaders Program and member of the Swedish Business and Industry Tax Delegation. He is affiliated with the Örebro University School of Business and serves on the Advisory Board of the Institute for Analytical Sociology at Linköping University.

Prior to his current position as CEO, Dr. Hatzigeorgiou served as the Chamber’s Chief Economist. Before joining the Chamber of Commerce, between 2009 to 2014, he served as Advisor to Sweden’s Minister for Trade and Nordic Cooperation. Additional previous positions include the World Bank in Washington, D.C. and Sweden’s National Board of Trade.

Dr. Hatzigeorgiou is a leading voice in the debate on global cities, economic growth, innovation, competitiveness and global trends. He has been featured in The Financial Times, The Atlantic and the BBC.

He received his PhD in economics from Lund University and graduated as a Fulbright Scholar from the Gerald R. Ford School of Public Policy at the University of Michigan, Ann Arbor.

His writings have been published in peer-reviewed journals such as The World Economy, the Global Economy Journal, and the Journal of Industry, Competition and Trade. He has written reports and chapters for books published by organizations such as the OECD and the Brookings Institution.

Dr. Hatzigeorgiou has been the recipient of several grants and scholarships, among others from the Royal Swedish Academy of Engineering Sciences, and the Swedish Royal Court. In 2008, he was awarded the Ohlin Prize in memory of Nobel laureate Bertil Ohlin.